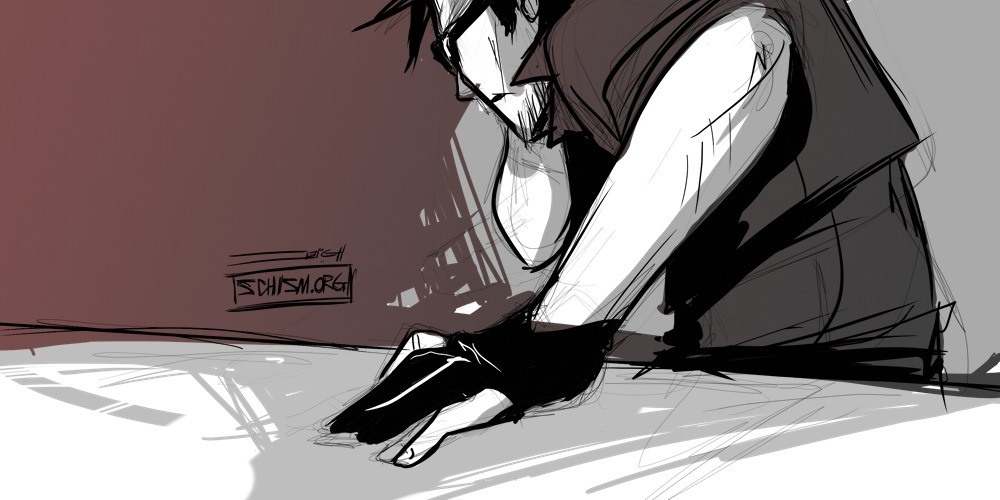 WALL OF TEXT. World State of Schism. I’m having issues with naming, so names of places are temporary/subject to change. Or just not fully given cause I suck. Potential grammatical errors etc area. (and just had to draw something quick to go with it.)

Government has no authority. Once it became clear how deeply dependent the world at large had become on the internet, cloud services, this global wireless landscape able to access every small part of everyone’s lives, wars were fought not so much with soldiers but with information. Spies now reigned, hackers, informants. An infological wartime, not just over land and physical resources, but for control of the web, control over people’s actions and thoughts, control over access. Viruses and cyber terrorism ran rampant, and while the governments of the world tried to maintain control, corruption and greed infected the ranks.  Big corporations and organizations, the military and government, all trying to get the latest tech  to gain control over the system, the flow of information to benefit their own causes with little regard of the profoundly negative impacts on everyday life for the people.

Eventually, the tensions climaxed when a new virus hit the system, tearing through security measures and firewalls like none before. Within two days, it had spread across all global servers, with extremely little being left uncorrupted.  At the same time, a new terrorist group began destroying data centers, cell towers, fiber optic lines. Everything was thrown into chaos, having been so long used to the instant access to the network from which almost all daily routines and systems depended on to function.  No motive was ever given, but with communication thrown back into the pre-network days trying to repair the damage proved to be a monumentally difficult task. While some groups tried to foster cooperation and unity, most decided to each their own and began claiming whatever they could and leaving the rest to fend for themselves.

15 years later in what was the country of XXX, things have settled though tensions still run high. Four main factions have survived, city boundaries being divided up between them each with their own new rules and LAN networks unconnected to those of their rivals. The government, usually referred to as the Politicos, having realized their loss now act mostly as somewhat neutral party, trying to negotiate and bribe their way through but still only concerned with looking out for their own bottom line. The World Core*  is the alliance of the powerful corporations that survived, working together (and sometimes not) to maintain their grip on the country. The military,   with the collapse of the net  found a new rise in influence with their armies, police forces and weaponry backing them up. Finally, the Peacekeepers is an alliance of doctors, educators and scientists striving to keep up the health and safety of civilians and doing their best to maintain stability and a quality of life as much as they are able.

World Core and the Military are at constant odds, with much fighting both covert and openly. The Politicos jab where they can, depending on who’s side is more beneficial for them. The Peacekeepers, meanwhile, try to stay out of the way while working with all parties to provide for civilians and continue their work.

Outside the major cities, in more rural areas (and in some stretches of the major cities) networks were never re-established. These areas are known as the Dead Zones, home to the extremely poor, destitute and by the many who  chose to swear off the reliance on such a digitally interconnected way of life altogether.  Criminal elements abound in these areas, including cyber terrorism cells still determined to create havoc wherever they could.

The perpetrator(s) of the original Schism virus were never identified. No one stepped up to claim the attack, and few bothered to try to discover the truth in the chaos that followed. If said group is still around and active is anyone’s guess.

* names subject to change cause IDEK yet